"Forward, to a brave new world!"

Yena is the 85th Hero in the game Arena of Valor, classified in the categories of warrior and assassin.

"Thou art one and all,

The sun, moon and stars bow to thy will.

Thy name be praised in the past, present and future.

Thou art the only truth,

With the final words of the prayer to Azzen'Ka, the kingdom of the demon lord descended over the ruins of the Helios Empire, bringing sandstorms that blocked out the sun. As those gathered rejoiced, Yena was the only one who remained calm and impassive. The Revolutionary mole in the Temple went about her new duties as temple acolyte, the prayer and dance that were offerings to their god.

"Yena?" A slim figure stepped out into Yena's path as she was going back to change. Yena scanned the surroundings to make sure that no one was watching, and then quickly pulled the figure behind a pillar. The flickering candlelight revealed the face of Heidi, a lowly servant in the Temple, and a Revolutionary.

"What is it?" Yena whispered.

"I...er...found something...." More used to taking orders than speaking out, Heidi stuttered and stammered through her words.

"And what exactly did you find? So important that we have to talk about it right now?"

"I...I'm not sure. I...I don't know what to do about it. You're the only one I could talk to." Gingerly, Heidi took out a glowing rock-like object from her pocket.

"What in the...an Andura Shard? Where in the world did you find it?"

"The cellar....could it be..." Yena muttered under her breath.

"Oh! I'm sorry." Yena let go of Heidi's arm, which she had grabbed a little too tightly, and took the shard from the girl. "I'll take this. Go now, and not a word to anyone, you understand? Not a single word!"

"Yes, yes ma'am, not a word." Nodding furiously, Heidi turned and disappeared into the shadows, leaving Yena alone with her thoughts.

As an Imperial-educated Reformist, Yena knew full well what the shard represented. The imperial treasure vaults were emptied when the empire was overthrown, but the Revolutionaries did not find the two things that were most important to them - survivors from the royal family, and the Andura Shards. The former would give the Revolutionaries a puppet that could unite the common and noble classes. The latter would give them access to a powerful currency that could be used to acquire food and weapons.

During the reign of the Helios Empire, the ruling classes enjoyed unbridled luxury from the export of Andura Shards, while governing the empire with an iron fist, treating the common folk as little more than slaves.

This was why Yena chose to join the Revolutionaries, giving all to the toppling of the empire. Now a far more difficult choice lay before her – find the member of the royal family and the missing Andura Shards, or report this to the Temple.

Even more difficult than the choice, however, was the mystery – how did Heidi, a lowly servant, come across such a crucial clue?

A stroke of luck? Or a trap?

Yena had no doubt that the demon lord Azzen'Ka knew about her and Heidi. Their espionage training was designed with Temple and government officials in mind, not demon lords.

Azzen'Ka knew. And he did nothing. Why? Either he did not see them as a threat – or he still had use for them. And so Yena made her choice.

Seven days later, Yena left the Temple with a new mission. Traveling in the direction of the sunrise, she crossed the vast Gobi wastes, to the land once ravaged by the demons of the Abyss, but was now a verdant paradise of green flora and flowing rivers. There she would find a prince in exile and a pair of artifacts that have lost their power.

"Excellent. You are smart – as I had hoped." Azzen'Ka had received her with a laughter that even his most loyal servants rarely heard. "Where your loyalties once lay matters not to me. Serve me now, and I shall elevate you to glory in my new realm."

Bowing deeply with her hands held before her chest, Yena allowed herself the slightest little smile, concealed by her flowing hair. "My lord Azzen'Ka, the one and only true god, who reigneth supreme over all. My life and glory are belongeth to thee."

Yena gambled. And it paid off.

"Go! Go where the divine light does not shine, find the fugitive prince Murad, and restore the artifacts of the empire!"

Yes, the royal family had a survivor. But he was not being held in the temple dungeons – he was in exile in a land far away, beyond Azzen'Ka's. As powerful as the demon lord was, his omnipotence extended only as far as the desert wastes. He needed someone to do his bidding, and he found that someone in Yena.

What Azzen'Ka did not know was this – through careful observation, study and deduction, Yena had learned his two great weaknesses. He could not fully trust his servants, whom he inherited from the empire, and so he needed to find an "outsider" who would do his bidding. He feared the power of the artifacts that Murad escaped with, and was eager – nay, desperate – to bring it into his fold. Yena's prodigious skill at analyzing psychology was precisely why she was chosen by the Revolutionaries.

"We are not here to overthrow one king." Yena still remembered what her mentor told her when she joined the Revolutionaries. "We are here to forge a world where no one has to be hungry or cold, where everyone is free and equal. Our enemies are the ones that would oppress and exploit those weaker than they are. There will be no concession, no compromise! Fight! Crush them, and clear the path to a new future!"

The Revolutionaries did not plan for Azzen'Ka's overthrow of the empire. But the new demon kingdom was as much their enemy as the old empire was, and as such it was Yena's enemy too. She had no qualms about putting an end to the royal line with her own hands, but until Azzen'Ka's demon kingdom falls, she had use for Murad and his artifacts.

"The enemy of my enemy is still my enemy." 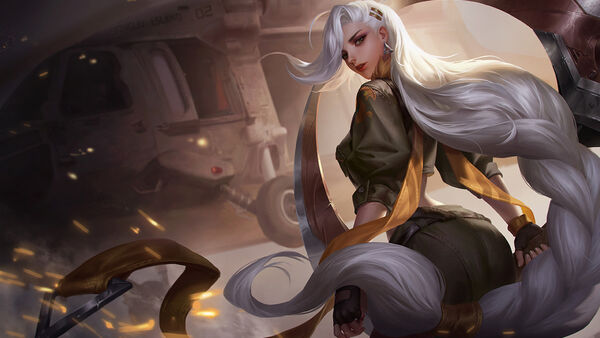